One of the important spiritual preparations I’ve made this Advent to enable my heart to draw closer to the Christ-child, to recognise the wonder of God-incarnate, sent from heaven to rescue us from ourselves, is…

…to re-write a Nativity version of “Baby Shark”.

Yeah, that kind of sums up my spiritual walk as a shattered parent.

For those of you who’ve missed 2018’s greatest musical phenomenon (where have you been? Space?), let me give you a brief musical and lyrical analysis of this epic work. (I have an Oxford degree in this kind of fuzz, you know.)

Musically, the piece centres around a I-IV-vi-V harmonic sequence, with an ostinato to accentuate these chords. The melody line, minimalistic in its use of just three notes (so-la-doh) repeated above each of the first three chords gains its interest from an insistent syncopated rhythm. The melody ends on a suggestive ‘ti’, which comes to land with chord V.

Lyrically, much is left to the imagination.

The first verse begins “Baby Shark”. We know not where this baby shark is, what he/she is doing or feeling – but we know that there is one, and that is where we are left to fill in the blanks, in a moment of pure poetic brevity. While we do so, we hear ‘doo-doo-doo-doo-doo-doo’ – an invitation, if you will, to create your own story from the opening two words.

The next verse follows in a similar vein – but this time it’s the “Mummy Shark” who comes into focus, in an arguably sexist parental hierarchy, but we won’t go into that here.

“Daddy Shark” follows, and then come the grandparents – and then, all of a sudden, the narrative becomes less ambiguous, as we realise we are, in fact, being chased by the sharks (who, we’d been led to believe, were quite friendly really), and need to run away FAST. Being a song primarily for children, you can guess that it ends happily, with everyone back to safety. 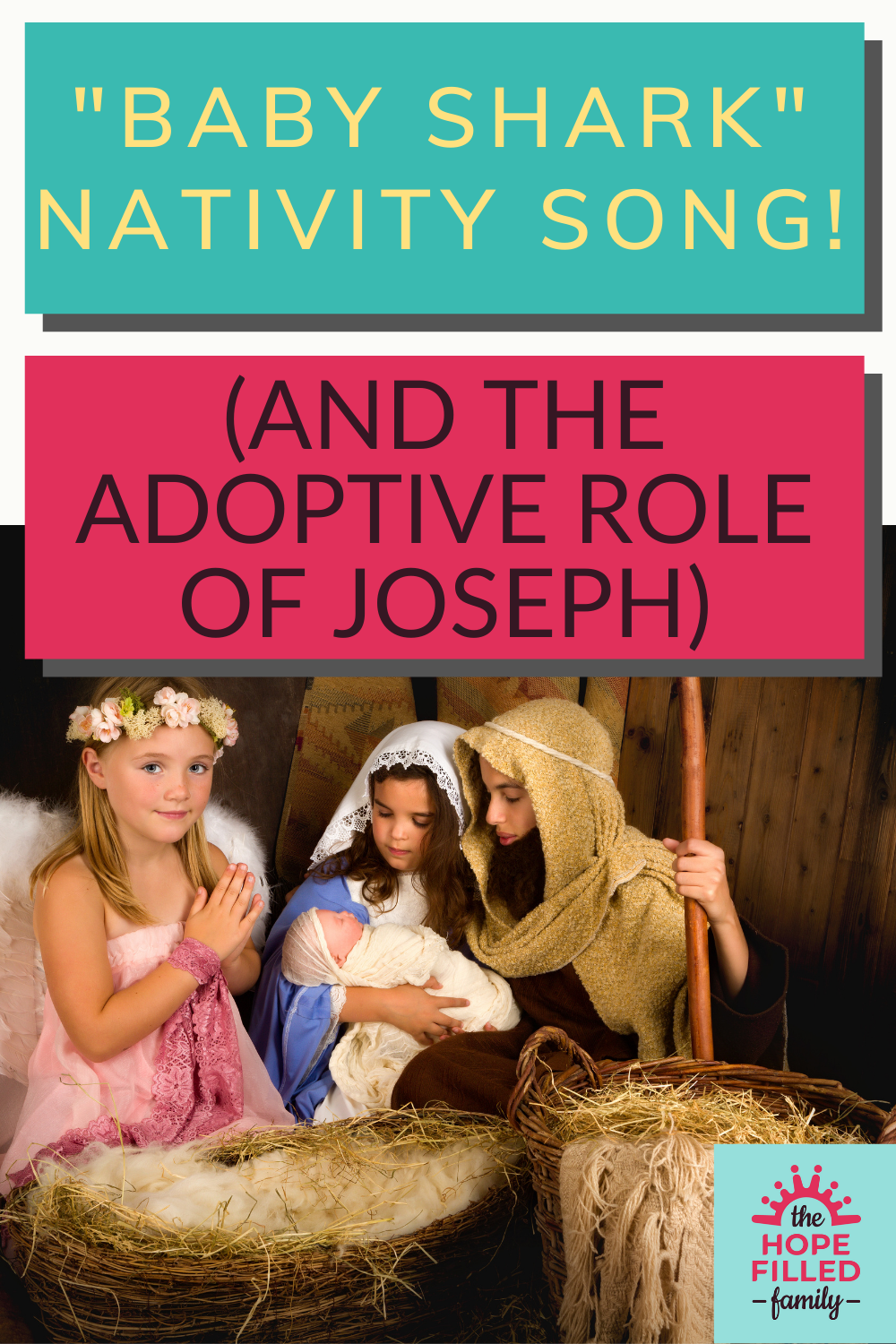 Anyway, the idea to write a Nativity version of “Baby Shark” is not one I can take credit for. It’s been done before.

But none of the versions I saw scanned.

I mean – the crucial thing about ‘Baby Shark’ is surely that each verse has three syllables, right? And, while this might be a problem if Jesus’ mother had actually been called Esmeralda, or if he’d been born in Constantinople, the actual, received Nativity story should be able to be compressed into lines of three syllables.

At this point, it should be known that I have a bit of a history of writing Christian words to kids’ songs – check out my Creation song (to the tune of ‘This Old Man’), David and Goliath (‘Miss Molly had a Dolly’) and Easter Bells (Jingle Bells).

So I started on my Baby Shark Nativity song.

‘Bethlehem’ fits nicely, as does ‘Jesus born’. Thank you God, for naming your son with a two-syllable name. Much appreciated.

Then ‘Shepherds ran’, ‘Wise men found’….oh, but hang on a sec? What about Joseph? What does he do in all this?

I mean – we need him in there, right? He was there and he was important. So – which one syllable can tell his story?

I tried ‘Joseph: dad’. Er, no. Tricky one, that. He was and he wasn’t. ‘Joseph: adoptive dad’ would be more accurate – but breaks the syllable count.

How about ‘Joseph helped’? Oh please!

Firstly, we don’t know if he did or not (maybe a local midwife or other helpful woman was drafted in to help, for example) – and, secondly, isn’t it a bit patronising to assume that all the ‘dad’ (for argument’s sake) does is ‘help’? Isn’t he an equal partner in all this?

I mean, I know there’s a Hebrew word which means ‘helper’ in an equal sense (such as ‘God is my helper’ (Psalm 54:4) or ‘I will make a helper who is just right for [Adam]’ (Genesis 2:18)), but I’m not sure whether it’s possible to express all of that theological background in one syllable.

(AM I OVERTHINKING THIS?)

You see, I wanted to sum up all the awe and admiration I feel when I think of Joseph. We don’t know much about him, but what we do know suggests he was a pretty awesome fella.

What did God call Joseph to do?

When God calls a couple to something, He calls them together. He may call them at separate times – but the call will be the same. So I don’t think Joseph was just tagging along for the ride – I believe he was a planned, important part of the Christmas story too (and not only because he was David’s descendant, and therefore fulfilling the prophecies).

I think Joseph is pretty amazing. We know he put God first in his life because:

And I need to put all this into one syllable.

He loved God, he loved Mary – and, perhaps most importantly from an adoption perspective – he loved Jesus as his own son. There was no love he withheld from the son God had given him to raise.

This Christmas, maybe we can all learn a little from Joseph’s ability to love.

If you fancy using my Baby Shark Nativity Song in your toddler group or all-age service this Christmas, the words are below, and they fit this karaoke version on YouTube.

Ga-bri-el! (doo-doo-doo-doo-doo-doo) x 3, Gabriel (move arms around in a slow circle while wiggling fingers to give ‘sparkly’ angel aura effect. or something)

(Watch out for the key change!)

WHY I'M SENDING MY CHILD TO A SCHOOL IN SPECIAL MEASURES
Should you be submitting to your husband when you don't agree?
ADOPTION IS NOT PLAN 'B'
HOW ADOPTION AFFECTS CHILD DEVELOPMENT (EVEN IF THEY'VE BEEN IN CARE FROM BIRTH)
SHOULD I HOME EDUCATE? 3: THE HOPEFUL HOME EDUCATOR
IS CHURCH JUST ANOTHER ONE OF YOUR FAMILY'S EXTRA-CURRICULAR ACTIVITIES?
What is expected of a godmother or godfather?
THE DIARY OF A (TRYING TO BE HOLY) MUM - BOOK REVIEW
Tweet
Share
Share
Pin

Previous Post: « WHAT GOES IN OUR ADVENT BASKET?
Next Post: HOW NOT TO TALK ABOUT YOUR IN-LAWS »