I’ll be honest: feminism didn’t really play a major part in my life until recently.

I’ve been pretty fortunate not to have known any gender-related obstacles at work or at home. I haven’t suffered abuse or harassment at the hands of men, nor have I been prevented from doing anything I wanted to do because of being a woman. I’m one of the lucky few for whom the battles and struggles of previous generations of women have paid off.

It’s not that I was oblivious to the ongoing need to fight for gender equality the world over but, as for my own battles, they’d already been fought, and won.

So perhaps it’s interesting, or perhaps it’s unsurprising, that I’ve been forced to think about feminism a whole lot more since I chose, in 2009, to take on a role which for centuries women were obliged to take, with no alternative option available to them: that of the stay-at-home-mum. 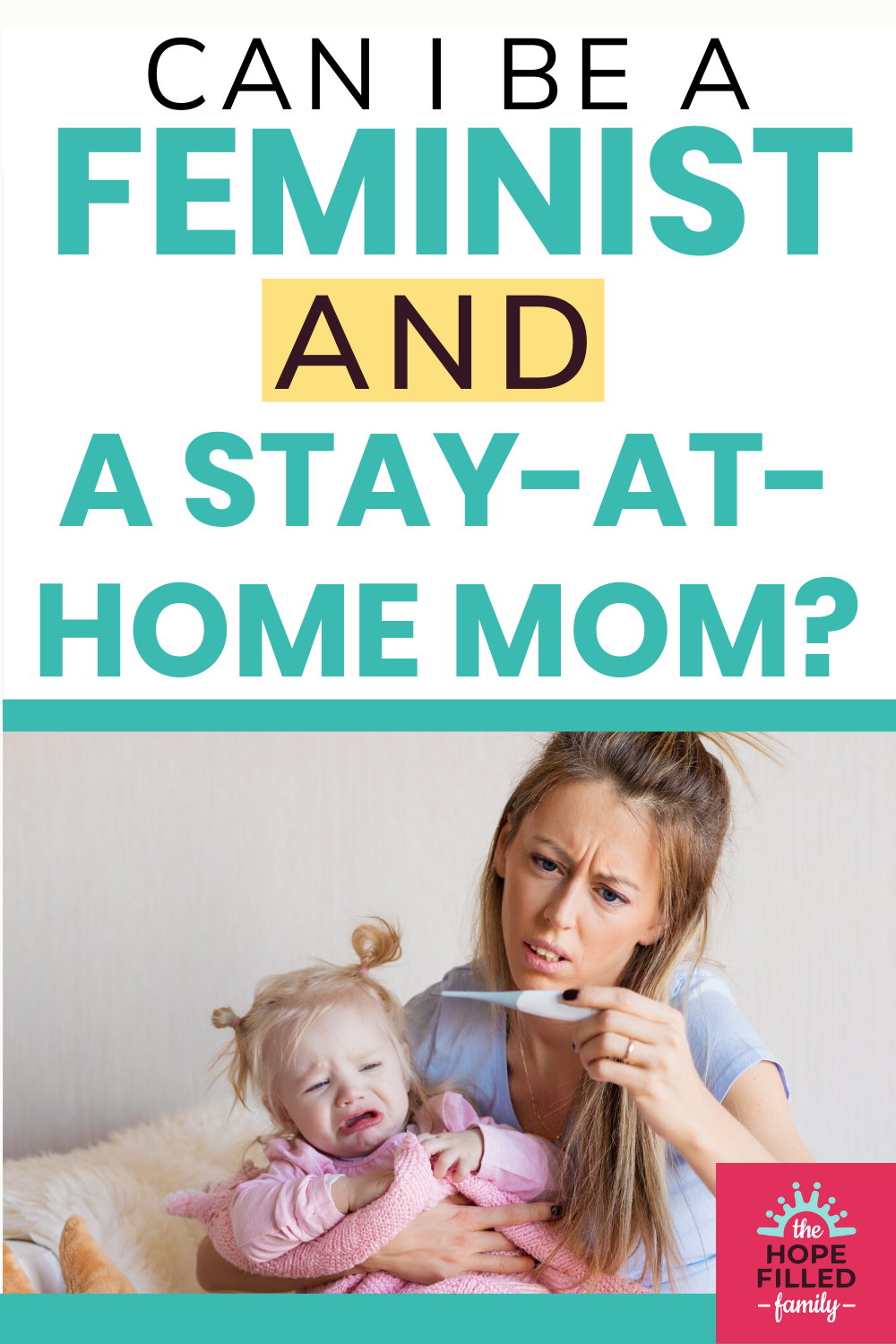 Over the last 8 years, I’ve seen a lot of friends become mothers, and many of them have felt torn between family and work – it’s such a strong compulsion to want to be excellent at both that the tension is nearly tangible.

So, if you’re reading this in the middle of the night whilst feeding your baby, or in a stolen moment between building Duplo towers and playing yet another Orchard Toys game, and you’re wondering where your feminist values have gone and what’s happened to your brain – this is for you.

Essentially I think we emphasise the wrong aspects of feminism.

Firstly, feminism is often associated with the need for women to be climbing the career ladder, excelling in whichever field they’ve chosen.

So it’s no wonder that when we stop and have kids, take time out, or take a lower-paid job so that we can be around for their needs, we feel like we’ve failed as women. We have been culturally-conditioned into thinking this is largely what feminism is about, because one aspect of feminist campaigning in the West is, quite rightly, the campaign for equal pay and opportunities in the workplace.

But this is just ONE aspect. And, really, it is about women who WANT to become top in their business being able to do so. It is not about forcing miserable women into a job they don’t want.

But of course what if you WANT to become top in your area of expertise, but have sacrificed this in order to devote yourself and your talents to your family? How do you deal with this tension?

Well it would take many more blog posts to deal with this issue, but – for the moment – let me suggest that in a 40-year working life, there may well be time to do both.

And, regardless of whether there is or not, perhaps we need to remember the importance of those early years in a child’s life, and the incredibly challenging job of nurturing a small child, meeting her needs and helping to regulate her emotions until she can do it for herself.

(Why Love Matters, by Sue Gerhardt, goes into much more depth about the potential impact that a rocky start to life can have later on. I highly recommend it!)

Leading on from this, feminism is often misrepresented as shunning the role of the mother.

Should fathers be encouraged to see themselves as equal parents, every bit as important in their children’s lives as mothers? Absolutely they should.

Should we be working to change attitudes – ours and other people’s – regarding stay-at-home-Dads, making them welcome at groups and social meet-ups? Absolutely we should.

Should workplaces seek to become as family-friendly as possible, allowing Mums AND Dads the flexibility of sharing childcare? Absolutely they should!

I’m aware that there are some feminists who genuinely do not value the work of a parent. (I’m a genuinely easy going person, but I’ll tell you for free: I don’t have a lot of time for these people. And that’s to put it nicely.) But, on the whole, feminism supports the important job of raising the next generation – it just doesn’t believe that this job should fall exclusively to Mum.

Neither do I. It just so happens, in our family, that everything works out nicely for my husband to be the full-time earner, and me to stay at home with the kids. He’s happy and I’m happy.

Stay-at-home-mums (and their partners) can practise feminism in the way they co-parent. I make lots of parenting decisions each day without consulting my husband, because if I had to call him every time I was facing the dilemma of what to serve for lunch, or whether my son should wear red or blue trousers today, neither of us would get anything done. But the longer-term decisions, the ones we have the luxury of pondering for a few days or weeks – those are ones we make together.

In addition, for the hours he’s around, my husband is a proactive, fully-involved parent and family member. He does stuff with the kids, he does housework, he researches stuff we need to buy – all the things I do solo while he’s at work.

Financially, we don’t have such things as ‘his money’ and ‘my money’ – his salary, plus child benefit and working tax credits, all go into our shared account, and we’ve never even spoken about whether I’m allowed to spend this money or not, because it’s taken as read that we are a team. He earns the money, I care for the kids.

To put it in crass, financial terms: if I didn’t have him, I’d be struggling to afford to raise my kids. If he didn’t have me, then he’d be paying one heck of a bill for childcare. So we are equal contributors to this family.

Your family maybe doesn’t look like what I’ve described above – in fact, it probably won’t, because there are as many different ways of doing family as there are families. But I hope you feel there’s a sense of equality in your family life. This is feminism – not some bizarre notion that mothers shouldn’t ever stay at home with their children.

Feminism is about education

Thirdly, feminism is about educating the next generation. And how better to do that than to take some time out to do the job yourself?

Perhaps there are some nurseries out there who actively seek to raise young feminists, but it’s not something I’d expect to see on most childcare websites. As a stay-at-home parent – mum or dad – you can be responsible for imparting good moral sense to your children, which includes teaching equality.

And this isn’t just for your daughters, by the way.

I’m very grateful that having a daughter has prompted me to think about these issues more – but I sure as heck don’t want my three sons growing up as misogynistic dinosaurs either. Because sexism is often about men’s attitudes, rather than women’s, it is so important that we take seriously the job of raising our little dudes to respect and honour those around them, regardless of gender, race, sexual orientation, or any other differentiating characteristic.

Personally, for me, I’ve found stay-at-home parenting to be a wonderful way of being able to take time over teaching these sorts of values to my children.

Of course many people do this amazingly whilst working part-time or full-time, but my point isn’t to elevate one way of doing things over the other. This is written for those of you who are at home, but feeling frustrated. I want you to know that you have a unique opportunity to raise the next generation of feminists, equalists, whatever you want to call them. You may not receive pay, promotion or recognition of your work – but please know that it is vitally important to society that you do so.

Feminism is for women AND men

Traditionally, it was largely just a bunch of women challenging the status quo – and thank God they did.

But, at its heart, feminism is a movement which preaches equality of the genders. This is something we need to pass on to both our daughters and our sons, and discussing with our other halves too, making sure that, however we divvy up the roles of bread-winning, childcare and household duties, we run households founded on equality.

As a Christian, I see this equality running throughout the Bible and, although every day is by no means a joy or an intellectual challenge, I am satisfied – for now – to pursue my role as a feminist stay-at-home mum with grace and determination.

HOW DO CHRISTIANS PARENT FOR GENDER EQUALITY?

#SHETOO: CAN I PROTECT MY DAUGHTER FROM BEING A VICTIM?

WHAT TO EXPECT WHEN YOU'RE EXPECTING? EXPECT NOTHING!
2 MYTHS ABOUT STAY-AT-HOME PARENTING
SHOULD WE AVOID MOTHERS' DAY JUST BECAUSE IT'S HARD?
HOW TO MAKE ELDERFLOWER CORDIAL (AN IDIOT'S GUIDE)
10 STOCKING FILLERS TO NURTURE FAITH FOR UNDER 5s
HOW TO CELEBRATE ADVENT AT HOME
WHEN YOU CAN'T BE THE PARENT YOU DREAMT OF BEING: THERE IS HOPE
HELPING CHILDREN CONNECT WITH GOD IN THEIR EVERYDAY EXPERIENCES
Tweet
Share
Share
Pin

Previous Post: « DOES BEING ADOPTED AFFECT A CHILD? (5 WAYS MY TODDLERS ARE DIFFERENT FROM YOURS)
Next Post: 5 FABULOUS THINGS YOU CAN DO WITH YOUR FAMILY THIS LENT »