It should say enough about our experience of adoption that this blog post was supposed to be titled ‘adoption: six months on’. Being around eight months late with everything has become a feature of the past fourteen months.

There you go, enough said. We’ve adopted kids, and now we have no time. Job done.

What? You want a refund? Blog not long enough? Oh go on then, ye of much time to spare.

Actually, unplanned though it was, the timing of this blog post is apt. Monkey and Meerkat were fourteen months when we brought them home – and it’s now been another fourteen months. This feels significant to us: they’ve been with us as long as anywhere else. 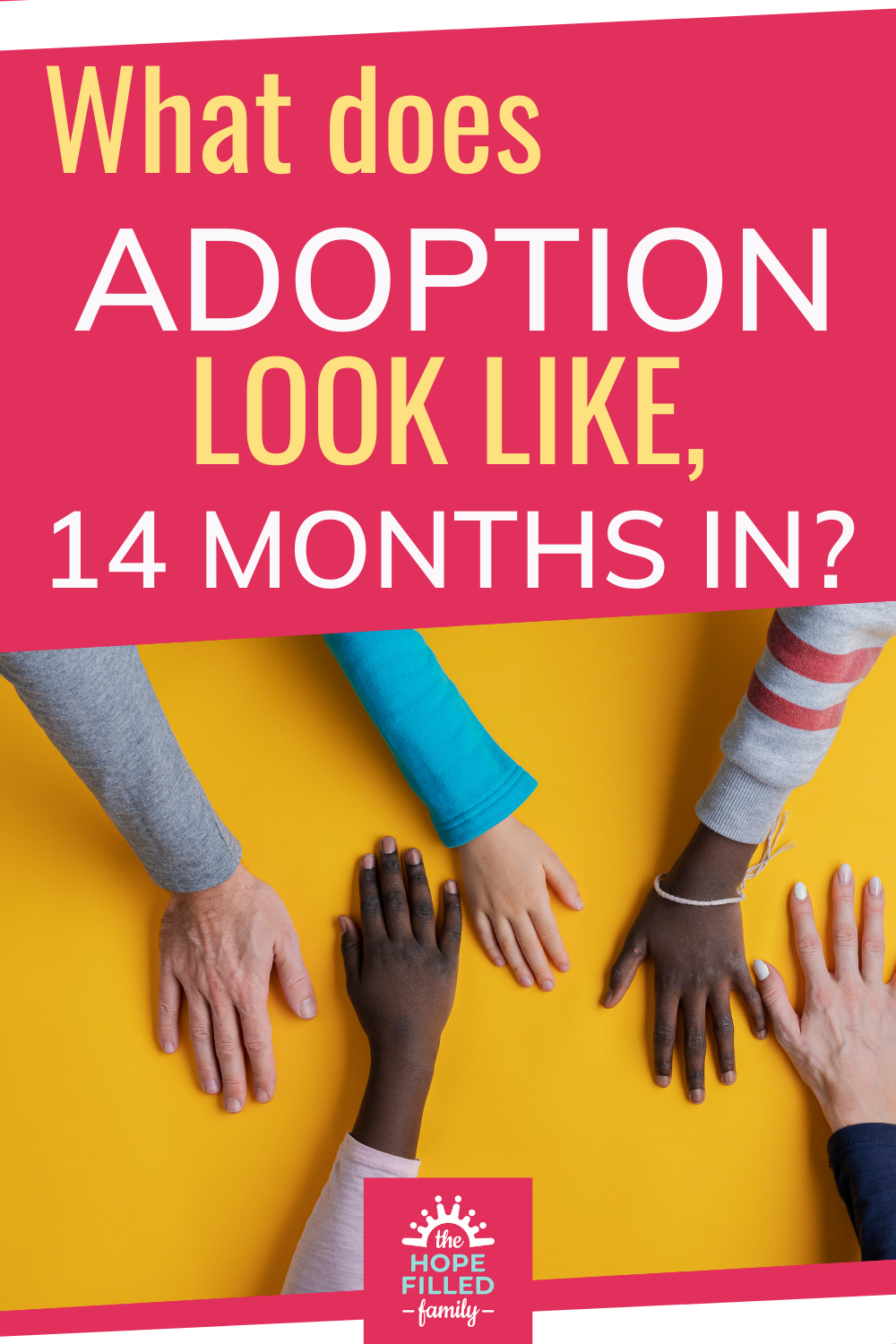 The main challenge for us has been the increase in family size – not the adoption. Did I mention that tasks run just a little bit overdue nowadays? That we have zero time for anything we need, or want, to get done, other than just keeping going from day to day? I’m sure the sadder sides of adoption will rear their multiple heads many times over the coming years – but during this last year-and-a-bit, it’s mainly been about just coping with two more kids, not to mention learning how to parent toddlers again. I mean, it had been a whole THREE YEARS since we had a 1-year-old and, you know, parent amnesia and all that. You remember the first steps, the cute giggles, the trips to the park and the holidays. Funnily enough, our brains are wired to forget about the crayon graffiti, the electronic gadgets destroyed, the items you always thought were too big to be flushed down the toilet. So we’ve been re-learning all those useful things like the lengths a 2 year old will go to in order to obtain some E numbers, or how to re-set your laptop screen when it’s been rotated 90 degrees.

The four kids thing has been massive. I both love it and feel ill-suited to it – in equal measure. “How do you do it?” people ask. I either shrug my shoulders and say, in a resigned sort of way, “I have no choice” or answer, matter-of-factly, “Well, I don’t iron and I don’t sleep”. People think I’m joking.

Of course, adoption has been a subtext of the last fourteen months. Things happen, and you ask “Is this because of the change in carer?”, “Is this because they know I didn’t birth them?” “Is this an effect of their experience in utero?”. We’re not totally oblivious to this. But, largely, the year has been about the usual sorts of parenting things: nurturing, loving, setting boundaries and expectations, planning, and trying to do the best for each of the four tiny individuals in our care.

To start with, I think my approach to any difficult behaviours or stubborn refusals was empathy. Then it became short-tempered impatience. Then the guilt came, then I did a combination, then I didn’t know what to do.

I still don’t get it right each time – who does?

But as I’ve got to know my boys better, I’ve been better able to sense when a cuddle or some reassuring words are needed, and when a firm re-iteration of the expected behaviour (and/or consequence) is needed.

It took a wise friend to remind me that kids need a consistent approach. Yes, they’re adopted, but they’re also 2 years old, with all the important boundary-pushing behaviour that comes with this age. They need to know where they stand, what’s acceptable and what’s not – and perhaps I’ve shied away from this in the past year, not knowing quite when to parent them according to my adoption training, and when to parent them according to my experience with the older two.

The sibling attachment took much longer than the attachment to us – but oh gosh, when it finally arrived it took my breath away!

From the start, the boys attached well to us, their parents – of course attachment is a gradual process and, month-by-month it got stronger, but we certainly don’t feel the boys have had any issues here.

And I’m sure it was a gradual thing with Mister and Missy too – the boys never disliked them, and the older ones always doted on their younger siblings – but Monkey and Meerkat didn’t instantly attach to their big brother and sister. If physical affection was refused then the older ones either didn’t notice, or were too patient with their new brothers to get upset.

But in the last few months, there has been a noticeable change. Monkey and Meerkat now take the initiative in giving physical affection to their older siblings. They are keen to say long, effusive goodbyes when Mister and Missy head off to school in the morning, they chat about them all day long, and get excited to go and pick them up each afternoon.

The amount of wrestling, chasing, role-play and general trailing them round the house has been so fun to watch. At least for the moment, genes don’t matter one bit to any of them. They’re three brothers and one sister, having fun growing up together.

>>Is adoption screwing up my birth kids?<<

It’s not just us who adopted

I’m so grateful that our friends and families have welcomed our boys into their lives on the same basis as Mister and Missy.

I wish I could put into words how amazing it’s been to witness the bond developing, for example, between Meerkat and his Nanny – no words for why or how the two of them click, they just do. It’s like the boys have come into their new extended family just expecting to be loved – they’ve given out love, and been richly loved in return. Why would they expect anything else?

The boys are not just our sons, they’re grandsons, nephews, cousins, godsons and friends to a much bigger group of people. Perhaps, like us, our families never thought it was possible to develop a family bond with people who didn’t share the same gene pool. Well, I think we’ve all learnt something. Adoption is for everyone.

Some day, I guess, the boys may suffer identity issues relating to their adoption. They will want to know more details about, and maybe meet, their birth family. We’ll support them wholeheartedly, but it’s good to know that however this turns out, they’ll always have a wide and supportive base in this family.

Where does love come from?

On a basis which is so regular I feel almost ashamed to admit it, I stare at Mister, all 7 years of him, and can’t believe he’s the same Mister as the big red baby I held in my arms after my first labour, laughing in disbelief that this tiny being could now exist outside of me.

When Missy is bossing her brothers around or articulately disagreeing with some aspect of my parenting, I can’t believe she’s the same Missy as the screaming missile who flew out of me five years ago, and took some calming down from the shock…so much so that I thought I’d never be able to calm my own baby.

But when I look at Monkey or Meerkat, I don’t tend to think of their entry into this world – not that I don’t ever think of this, the bits I know, of course I do. But that part of their existence belongs to someone else, and I would never take it from her.

No, I think of the day we met them, how curious Monkey commando-shuffled through to the hall of his foster home to see who was at the door (is it the postman? or my new parents?).

How Meerkat was content to sit and play and wait for us to come and join in. How they both belly-laughed when their new dad put a toy on his head and made it fall off.

I think of them then, and I see them now, and I feel equally proud of how far they’ve come, how confidently they walk and run, talk and listen, sing and dance. I didn’t carry them, birth them or breastfeed them. It doesn’t matter. It actually doesn’t matter. They are loved.

God has all the love we need

When I first felt God’s prompting on adoption I blurted out, “But I can’t do it, I don’t have that much love”, to which the answer came frustratingly clearly, so clearly I didn’t have an excuse. “But I do. And I will give you all the love you need.”

And He has done.

They are loved. So loved. And I know this hasn’t come from me. I’m weak and powerless, and my own ability to love is so flawed and self-centred.

No – this love has to have come from a Higher Being, the One who created love and is love, the One whose own beautiful love story centres around adoption, the only One whose love is entirely and unreservedly self-sacrificing. What a privilege to receive and give this love.

WHY AND HOW SHOULD EXHAUSTED PARENTS MAKE TIME FOR SEX?
OUTNUMBERED: WHAT HAPPENS WHEN YOU UP-SIZE YOUR FAMILY
HOW TO PLAN A DOLL-THEMED BIRTHDAY PARTY FOR £30
Should my child take part in activities which clash with church?
#TOOMANYCHILDREN
ADOPTION AND THE BENEFITS OF THE SUZUKI METHOD
DIY Resurrection Eggs (with free Story Book PDF!)
HOW TO SURVIVE SCHOOL CLOSURE AS A FAMILY
Tweet
Share
Share
Pin

Previous Post: « ADOPTION AND ADVENT: COMING HOME
Next Post: AM I OK WITH MY DAUGHTER ASPIRING TO ‘MUMMY’? »