You know my absolute favourite type of books?

Those which are short and pack a punch.

Short because…well, clearly, this exhausted mama doesn’t have a lot of time to read, and who wants to be slogging on with the same book for months and months? War and Peace ain’t gonna get finished in the next few years, that’s for sure.

The really great books, however, are not only short but punchy, thought-provoking, life-changing. Because – er…I still have a brain in there, underneath the layers of laundry and dust and Lego bricks. I want to be challenged, provoked, disturbed, comforted, exhorted…and also tickled pink, if possible.

Yeah, I don’t ask much from my reading fodder.

Books which have met this criteria in the past have been Forever Loved: Eve’s Story, See You Soon and The Diary of a (Trying to be Holy) Mum. I recommend them all. 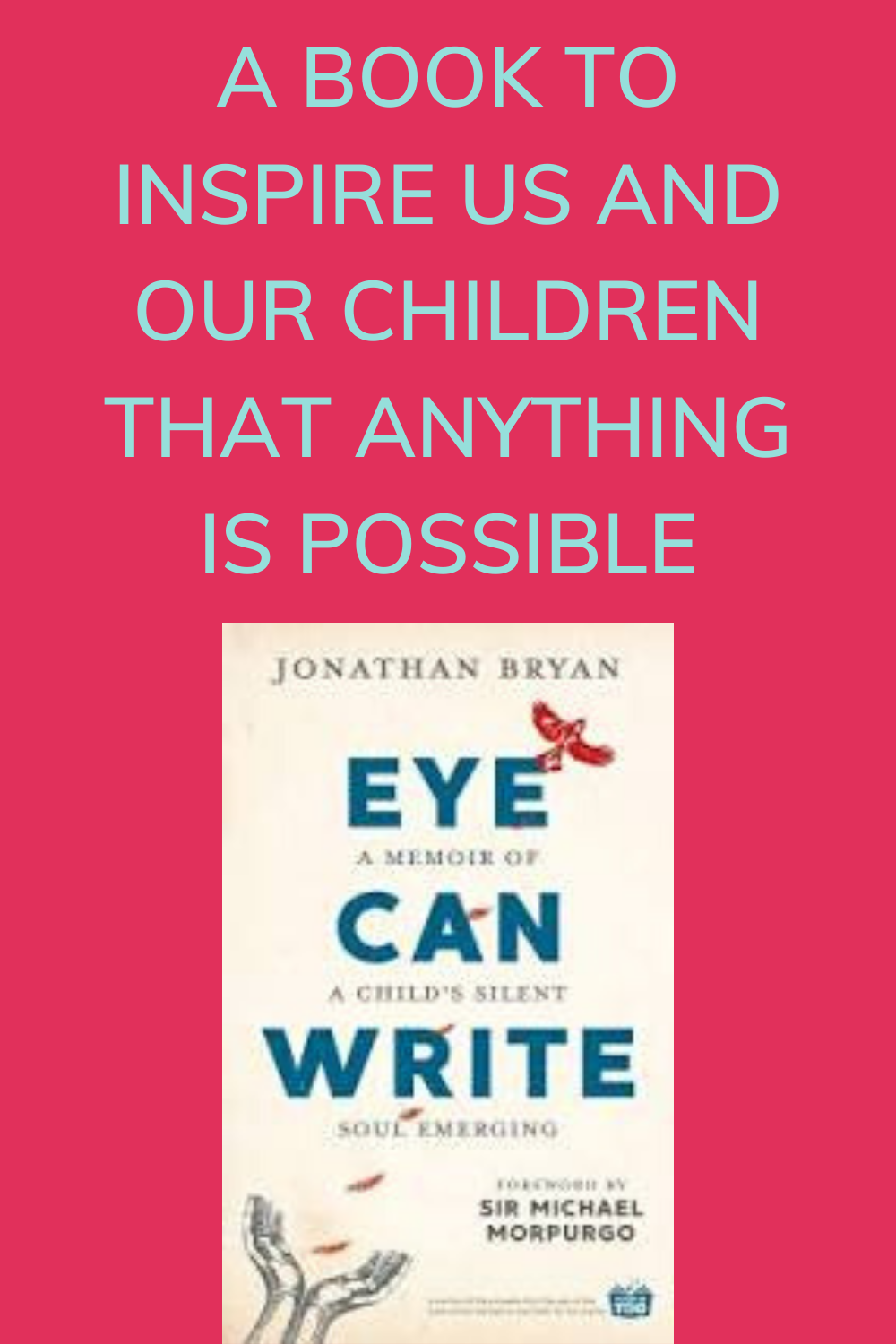 This Christmas I found another book which met all these requirements. Eye Can Write by 12-year-old Jonathan Bryan delivers his unique, one-in-a-million story with such warmth, courage, faith and self-deprecating humour that I couldn’t put it down.

Born after a car accident, Jonathan was discovered to have quadriplegic cerebral palsy and kidney failure. He spent a lot of time in hospital, including for a kidney transplant, and has nearly died several times.

This book is the story of how Jonathan – despite not being able to walk or talk – learnt to read, write and communicate through the use of an E-Tran frame board (eye transfer), where he uses his eyes to pick out words or letters he requires.

I read Eye Can Write over one or two of those “Just popping up for my shower, dear” moments over Christmas.

You know the type.

Your other half is off work (which, in your mind, gives you licence to take as long as you want getting ready while they entertain the kiddoes) so you ‘nip upstairs’, only to emerge two hours later showered and dressed, yes, but also eyes-glowing, and face ever-so-slightly guilty, because you know you’ve just read an excellent book while your poor spouse has been scraping Weetabix off the in-laws’ floor and refereeing arguments about whose turn it is on the iPad.

My response – watch and learn, readers, I think it’s a good one – was to bypass the exasperated look on hubby’s face as I emerged from my innocent dreamworld of “Tantrum? What tantrum? It sounded awfully quiet to me…yes you know I would have come to help if I’d heard anything…”, and instead wax lyrical about the book – and, particularly, its impact on my faith.

(Hubby is a vicar, you see, so I know he can’t kick up a fuss if his own wife has been nourishing her spirituality while he’s been at his wits’ end with a child who is kicking and screaming because he didn’t get the red spoon for breakfast.)

But – actually – it was totally true.

Eye Can Write is inspiring and has challenged my faith. Here’s why.

The first part of the book is written by Jonathan’s mum, Chantal, and the second by Jonathan. As a mum, I identified with Chantal’s fears, her love, her fierce determination in not giving up on her son.

Chantal’s interjection later in the book, once Jonathan has taken over the story, is deeply moving. He is now nine years old, and has reached the point where he can communicate independently.

What do you ask your nine-year-old child, who can now tell you anything? No need to predict what he wants, no need to try and interpret his smiles for pre-set answers – he can just spell it out for himself…

…Acutely aware that the phrasing of the questions was important, I knew it was crucial not to lead him to certain answers. After essentially being restricted to yes or no answers all his life, I now wanted to encourage as broad an answer as I could.

‘What is important to you?’

Like a walk with many paths, we were experimenting, going down different avenues to see where it would take us and what the view looked like.

‘Jesus?’ I asked. After all, he had been surrounded by Christians all of his life.

‘Seen. What have you seen?’

(I’ll leave the cliff-hanger there so that you can get the book yourself and discover what happens!)

I was inspired by Chantal’s deep faith, her instinctive mothering, her sense of helplessness in the situations she found herself in – but I was also inspired by Jonathan’s deep faith, the way Jesus had revealed himself to Jonathan way before he was able to communicate this experience to anyone else.

Another inspiration to me was the close-knit family life Jonathan clearly shares with his parents, Chantal and Christopher, and younger sisters. I asked Jonathan about the importance of family in his story.

“Without the love, support and joy my family instil within me, my story would be very different. Being known and loved just as you are is the most beautiful gift that families give, it is the root of our self-esteem and our belief in what is possible. For me, my family’s commitment led to my mother removing me from school and teaching me to read and write.

“Of course, one of the wonderful things about being a Christian is that I am part of God’s worldwide family of believers. And this family has been enormously important to me – in fact, without the prayers and support of the church family I don’t think I would have a story to tell at all.

“When I have been very ill, members of this family have prayed for me; people I have never met and who have just heard my name. But also through church on Sundays I have been included in a family that has meant I have gained lots of relations through our common heavenly father.”

And what about his relationship with his sisters, Susannah and Jemima, to whom the book is dedicated?

“Individually my sisters are my delight. Spending quality time one-to-one with either Susannah or Jemima brings me more joy than anything else. Cuddling them, listening to their chatter and baking with them; anything that involves their company.

“Like a shroud over their young lives, my ill health, with all its inevitable consequences, hangs over them. While I am still here my desire is to put things in place as much as possible to help them. For the sibling support services, I referred myself to the local children’s hospice; and how to prepare for when I am no longer here is the question I ask people the most.”

Jonathan’s attitude towards death is inspiring. He is matter-of-fact, yes – after all, here is someone who faces death on a more regular basis than most of us, so he has to be. Death is not a taboo subject for him.

But it would be wrong to say his attitude was pragmatic, for this would imply a sense of resigned acceptance about the inevitability of death.

No – Jonathan’s attitude is positive – desperate, maybe – about going to heaven and being wonderfully healed, restored, and enjoying an undamaged relationship with his Father God. While he is still on earth, however, he is determined to use his time to advocate for those who are the position he once was in.

“My story is outrageous,” he continues. “Whilst the media have wanted to focus on my mother teaching me, I have had to argue that no child should be removed from school to be taught basic literacy skills. It is a very misfortunate by-product of my story that parents of special needs children feel guilty and come to me in tears feeling they have let their child down by not teaching them to read and write at home. This should not be a parents’ job, and it is why I set up my charity Teach Us Too, so that all children are taught to read and write regardless of their label.”

Through his campaigning, Jonathan’s story has been featured in newspapers and The One Show, and he’s met MPs, royalty and Sir Michael Morpurgo, who writes the foreword to Jonathan’s book.

Eye Can Write is an amazing book with a far-reaching impact. Prepare to be challenged!

Jonathan Bryan is the twelve-year-old author of Eye Can Write and founder of the charity, Teach Us Too (who are receiving all his proceeds from the book). Faith, family and friends sum up all that is important to him. He also passionately campaigns for all children to be taught to read and write regardless of their educational label, for which he has been awarded a Diana Legacy Award and a Pearson Young Person of the Year Award. Jonathan blogs at Eye Can Talk.

SHOULD I HOME EDUCATE? 3: THE HOPEFUL HOME EDUCATOR
5 UNCONVENTIONAL SPIRITUAL DISCIPLINES OF A NEW PARENT
ONLY 1 IN 4 GIRLS CALL THEMSELVES 'HAPPY' - SO WHAT ARE WE DOING WRONG?
Is it Normal for Families to Not Eat Dinner Together?
THE MERMAID WHO COULDN'T - BOOK REVIEW
A CHRISTIAN PARENTING BOOK FOR SINGLE PARENTS
A FREE ALL-AGE SERVICE FOR GOOD FRIDAY
20 Fabulous Bible Studies for Women
Tweet
Share
Share
Pin

Previous Post: « 7 EASY STEPS TO MAKING A FAMILY MEAL PLAN
Next Post: MY DAUGHTER DOESN’T DO ANYTHING I ASK…AND I COULDN’T BE MORE GRATEFUL »