I am no Pinterest-able Super Mum, but I do like a good party – and, ever since I started to blog about my kids’ birthday parties, distant friends and families have started to ask what I did for the latest party. So here goes…

Traditionally, my kids have been spot-on at picking interesting, slightly quirky party themes. Two years ago, Mister had a robot party, and Missy chose a dollies’ tea-party (both of which I planned for around £30 – click the links to find out more).

Last year, we had a Peter Rabbit party and a Fairy party.

Not so this year.

Frozen and Minions. (There you go, a sneak preview into the next blog post.) Well, at least it wasn’t hard to get party supplies – and the pound shops are all over anything current, so that helped. 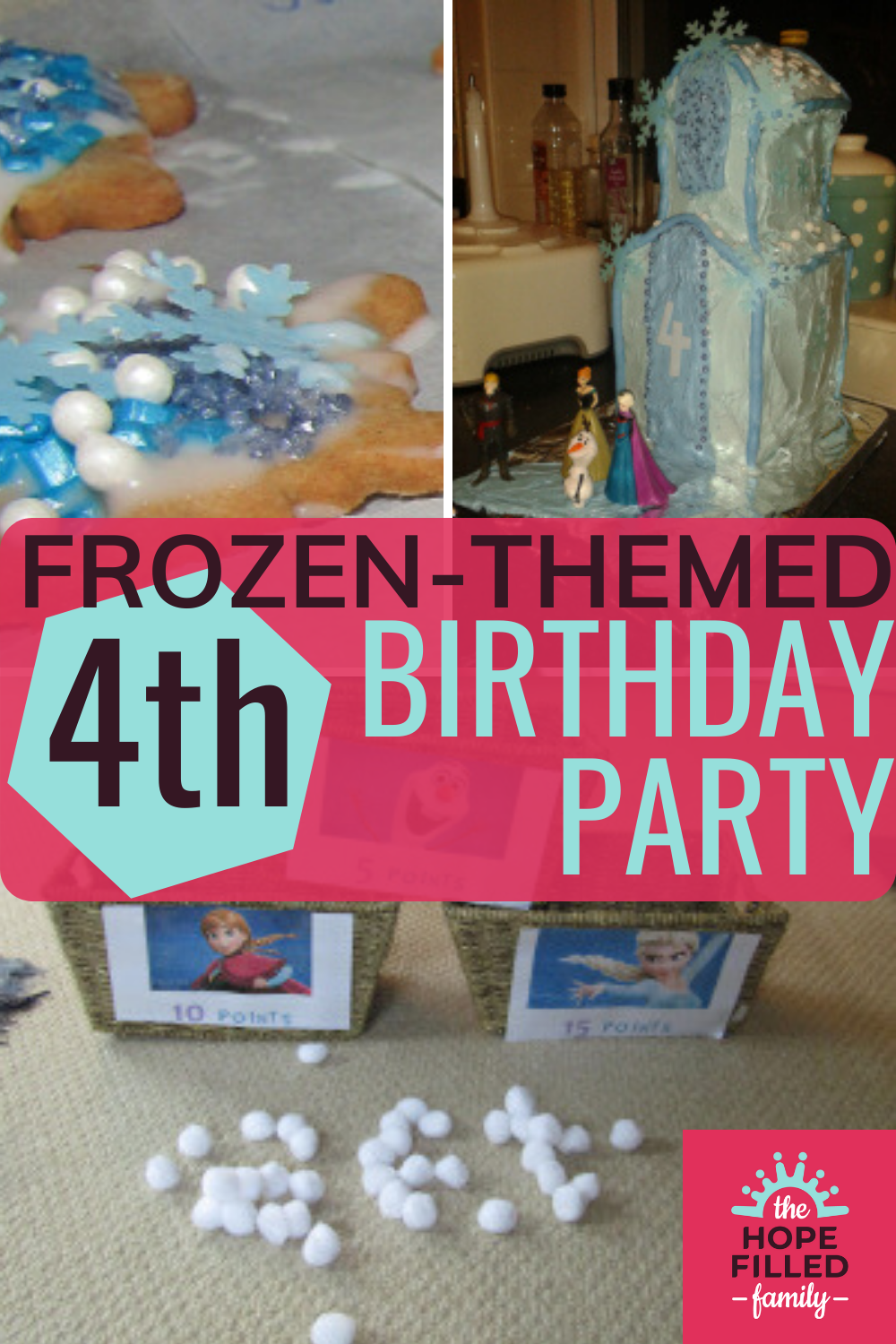 To start with, I involved Missy in making the invitations – she absolutely loves any creative activity, so she and her brother helped to decorate large sheets of paper with blue and silver paint and glitter, and then I cut snowflake shapes from them. She helped assemble the finished cards which I think, although rustic, are rather nice!

For decoration, we stuck to the Frozen colours of silver, ice blue and violet, and put up balloons in these colours, as well as simple cardboard bunting. This was so cheap and quick to make, and the beauty is that I can re-use in future years, switching colours to fit different themes.

I always plan a couple of free-choice activities for the first half hour or so, to keep the kids entertained and happy whilst waiting for everyone to arrive. I’ve found that parties in the home don’t require so many extra activities, because of the toys which naturally provide a distraction – but parties at outside venues require a bit more thought.

I got the snowflake cutters from Lakeland – not cheap at nearly £10, but oh-so-useful for all future Christmases! I ordered silver, blue and white sprinkles online, as well as the gold crowns and sparkly gem stickers.

Then it was time for games. Pin-the-nose-on-Olaf was a no-brainer, but I’ve found in the past that kids can get bored queuing up for their turn, so we ran a Snowball Toss simultaneously, to shorten the queues. It kind of worked, in as much as small children can wait more than 3 seconds for anything.

We then played Musical Frozen Statues (obviously) and Pass the Parcel. Argh. I swore never to do PTP again after this party. It takes ages to prepare in the first place, goes on too long when the kids are actually playing it, everyone gets bored after they’ve unwrapped their layer, everyone knows that everyone’s getting a turn, and it’s just so gah.

(Am I mis-remembering my childhood when I swear that our PTPs had no more than five layers, absolute zilch between the layers apart from possibly some totally embarrassing forfeits that you never wanted to get in a million years, and if the music didn’t stop when you were holding the parcel then tough luck?)

We then did a Frozen treasure hunt, using these ready-made clues. I left out the harder clues, just used a smaller number of easier ones, and they led us into different rooms around our downstairs, ending up in a pile of Frozen lunchboxes in the kitchen (lunchboxes sourced from eBay).

This was my, quote, “great idea” – to save preparation time, solve the problem of not being able to all fit round the table, and generally make food distribution easier and quicker.

Not sure it was entirely successful – mainly because the fine tastes of under 5s are just about as numerous as the number of under 5s themselves, and doing a ‘one-size-fits-all’ box only really suits children like my son and his friend, who are yet to know a discerning palate (praise God), and whose one criteria for what they put in their mouths is whether it’s edible. Everyone else just ate the Hula Hoops and Party Rings.

Then the cake. Ah, the cake. Missy doesn’t eat cake, just the icing. So this year I attempted a gingerbread tower of Frozen-ness. It kind of worked.

For about 24hrs. Then it caved in on itself, and had to be propped up with a plastic food storage box.

Fortunately, my kids are not yet bothered about stuff like whether a biscuit tower holds together, and I’ve given my happy husband another dinner-party anecdote at my expense, so it ended well for 3/4 of us.

I’m glad I had a couple of extra games up my sleeve, as the party under-ran, and we had a spare 10 minutes to fill after lunch. We did sleeping lions (little tip: this is a great game to pull out when you’re starting to tire of the fifteen under 5s in your home – and it requires absolutely no preparations or props – genius) and something else which must have been exhilarating because I now have absolutely no recollection of what it was.

And that, my friends, is how we party.

STAY-AT-HOME PARENTING: WHERE'S THE INTELLECTUAL STIMULATION?
HELPING OUR CHILDREN MANAGE THEIR EMOTIONS AROUND CHRISTMAS
WHAT TO EXPECT WHEN YOU'RE EXPECTING? EXPECT NOTHING!
SHOULD I HOME EDUCATE? 1: THE OPEN-MINDED HOME EDUCATOR
SUSTAINABLE PARENTING - RIGHT FROM THE EARLY DAYS
20 ZERO-WASTE SNACKS FOR CHILDREN
HELPING CHILDREN CONNECT WITH GOD IN THEIR EVERYDAY EXPERIENCES
10 Uplifting Bible Verses about Parenting Responsibilities
Tweet
Share
Share
Pin