As an organised, sentimental yet time-starved Mum, my approach to archiving all those special bits and pieces that your kids produce (and which you want to keep because, my gosh, some of it is truly awful), consists of throwing them all into named box files.

It works pretty well: each child has a file, and in it there is a fairly comprehensive stack of cards they’ve made, special pieces of art, certificates, and so on.

If anyone ever wants to marry our kids (seems unlikely at the moment, given the apparent difficulty of remembering to change underwear on a daily basis, but you never know, this may sink in at some point), then we have a stack of stuff ready to embarrass/encourage them at their Hen/Stag parties, in the wedding speeches, or whenever we damn well feel like it. (Ammunition? Me?)

However, in Monkey’s file there will always be a gap where his Mothers’ Day card 2018 should have been. Mister and Meerkat have theirs safely filed away. Missy, who you can’t stop writing and drawing for love nor money, has all 28 of her cards filed away (well, maybe I binned a few).

But there’s a gap in Monkey’s file. 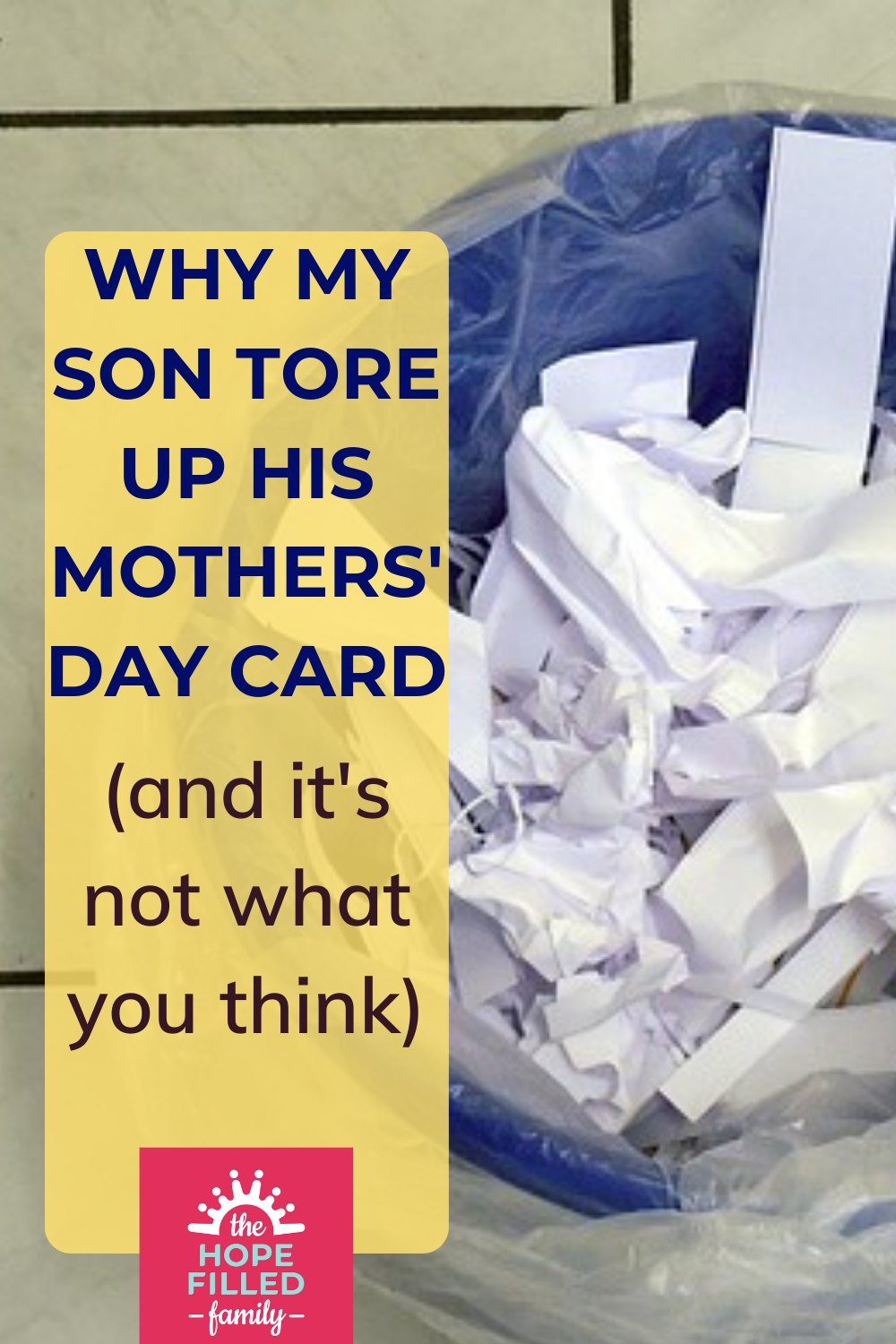 About a week or so after Mothers’ Day, he came into the kitchen where I was doing some job or other, a bit distracted as usual, and said calmly, “Me not like my picture. Me put it in the bin.”

I didn’t know to what he was referring, so just said, “That’s fine, sweetheart, you can do what you like with your own drawings”. It was only later that I discovered it was the cute card he’d carefully coloured and decorated at preschool for me.

A battle against me?

You might think that this was some sort of toddler protest, that what Monkey was actually saying, in fact, was that I wasn’t his ‘real’ mum and that I therefore didn’t deserve a card.

You might think that, and you’d be forgiven. After all, isn’t this one of the well-known emotional stages that an adopted child might go through?

But I’m pretty sure Monkey wasn’t making a statement about me. For one, although we talk about birth mum, he is still too young to understand the implications of having two mums, and to consider that perhaps I’m not the best option, perhaps he’d have preferred to have had the other one raise him.

Secondly, he was entirely calm as he tore up the card and binned it. We hadn’t had a fight, he wasn’t having a meltdown, there were no tears or harsh words.

And I’m actually pleased that I didn’t realise till later that it was his Mothers’ Day card that he’d ripped up, or else I might have made more of a deal out of it. (And that would have been entirely because I was hurt, not because of any consideration to his feelings.)

The need for control

The reasons I believe he tore up the card are a little hard to describe, so bear with me.

Partly, it’s because he needs to feel in control. Whilst my boys can’t remember moving from birth mum to foster mum, or from foster mum to me, the experience of changing care-giver as a young child is highly traumatic, and leaves its imprint on the mind. This imprint is one of anxiety and insecurity – “Will we be moving again? Will this family stick with us? Is it our fault?”

Whilst all babies and young children have decisions made for them, these are usually stabilising decisions which help to make the child feel more secure (such as what house to live in, which childcare to use, what to feed them etc.).

By contrast, the decisions that are made for looked-after children, although positive in the long-term, have an initially de-stabilising element. In order to keep these children safe, and to provide them with the best chance for their future, they need to be moved from one caregiver to another – moved away from everything they have come to know.

The effect of this is that looked-after children can often look for ways they can control and stabilise their environment. A simple way that a young child can do this is by taking ownership of something they’ve created, something they know is theirs – and to destroy it. My son wasn’t claiming that I wasn’t fit to be his Mum – he was simply taking control over something in his life which made him feel safe.

(Check out Four Types of Attachment Styles for more on attachment-related behaviours.)

The jury’s out on whether I should encourage or discourage this behaviour (it’s not the first time), but I’m tending towards the idea that allowing my boys to take control in appropriate settings, whilst realising when their Dad and I are in control, is in the right kind of ball-park.

And therefore, if they want to destroy stuff they make, I’m not going to protest wildly that “Now I don’t have anything to cover the period September-October 2017 on your 18th birthday speech! Damn you, child, with your lack of concern for feeding your mother’s maternal insanity” even though that is EVERY BIT how I feel.

Another reason for the destruction of the card – one which worries me a little more – might be that Monkey has a low opinion of himself.

It is highly common for looked-after children to experience feelings of inadequacy (“I’m not good enough”, “My birth family didn’t want me”, “I don’t have a proper home”, “I’m not really their son”). I worry that the destruction of something he’s made reflects Monkey’s attitude about himself (which he can’t yet articulate) – that he is not valuable or precious or loved, and neither are the things he owns or makes.

(This article I wrote for Home for Good on the subject of shame in adopted children explores this idea further.)

There is no easy answer to this one, except to keep on loving, keep on reassuring, keep on praying, keep on whispering over and over again, “You are my very special son, and I love you. My sweet, special boy – I love you so much” until, like a stuck record, it becomes the unswerving refrain of his soul. Until he starts to believe it.

It’s only a card. I may joke about sentimentality, but really I’m not fussed whether it’s in the file or not.

Like so much of adoptive parenting, what really matters is not the short-term behaviours but the long-term goal: parenting my son to face the future with a healthy attitude about himself and others.

It might sound easy, but to a destabilised and insecure child, it’s anything but.

Check out 5 Ways my Toddlers are Different From Yours.

WHEN FLEDGLINGS FLOP: WHAT TO DO WHEN YOUR TEENAGER IS OUT OF CONTROL
30 SIMPLE LENT ACTIVITIES FOR FAMILIES
HOW NOT TO TALK ABOUT YOUR IN-LAWS
DAYS LIKE THESE
CREATION SONG FOR KIDS
WHY ADOPT WHEN YOU CAN HAVE BIRTH CHILDREN?
THE LONELY PARENT: COMBATING ISOLATION
I WANT TO SAVE THE PLANET...BUT I'M LATE FOR THE SCHOOL RUN
Tweet
Share
Share
Pin

Previous Post: « THE DIARY OF A (TRYING TO BE HOLY) MUM – BOOK REVIEW
Next Post: WHY ADOPT WHEN YOU CAN HAVE BIRTH CHILDREN? »