When both Missy and her best friend independently asked us mums for a fairy party to celebrate their 3rd birthdays, a joint bash seemed obvious.

OK, so she didn’t quite say it like that – Jen is a diplomat.

But in a very tactful and polite way, she basically said the above. I reassured her that I was turning over a new leaf when it came to parties – and that she was to be my Party Insanity indicator. She agreed.

Party planning was mainly very fun (if you take out the bit where the girls were all like “But we just want a bouncy castle…” when we were in the throws of making pretty fairy skirts and incredible crocheted Peter Pan hats).

Making the cake together could have resulted in the end of our friendship – but, fortunately, we got through that stressful Friday afternoon, the cake was still standing by morning, and even ended up looking enticing. 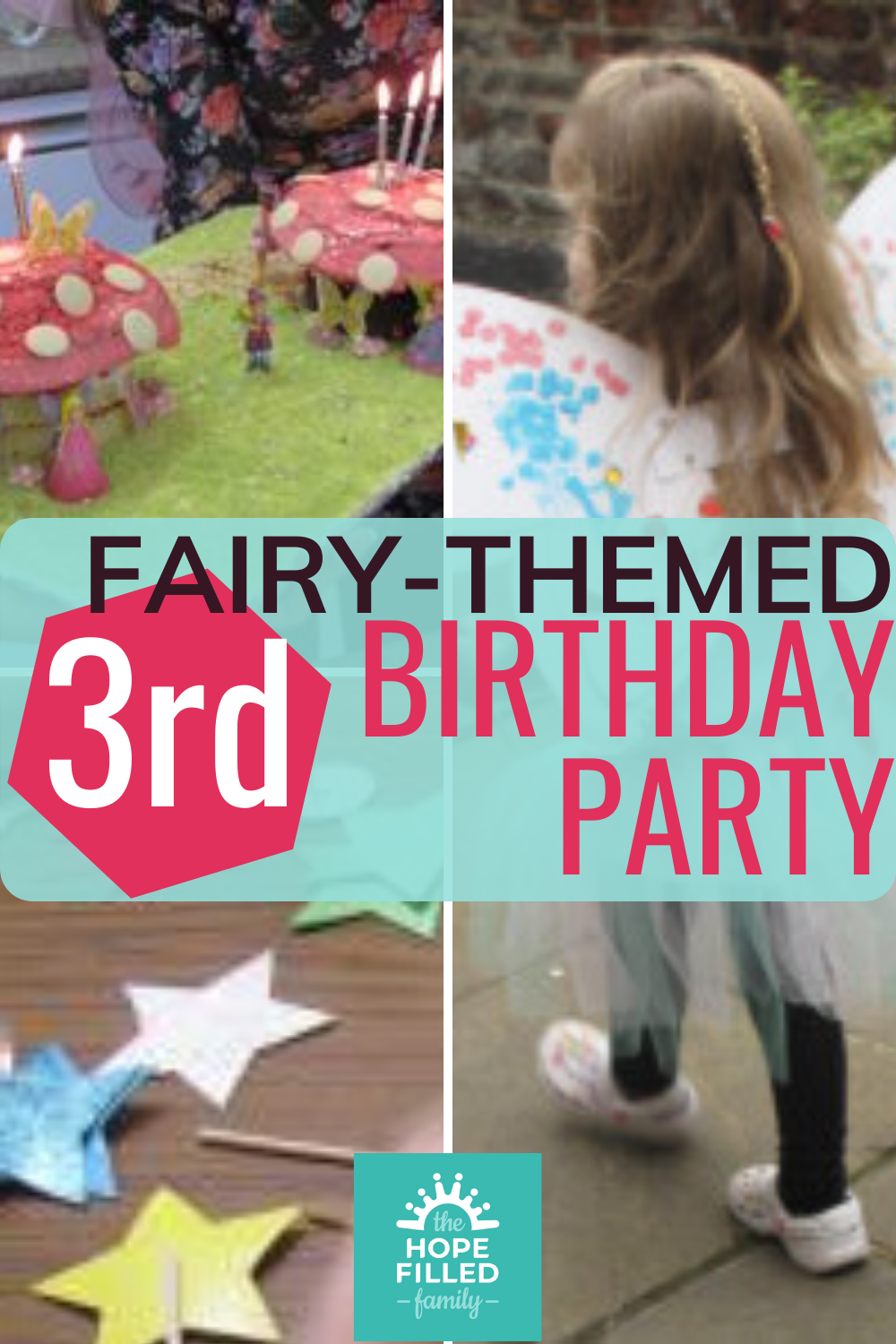 Anyway, onto the party:

We had a mixture of girls and boys coming, between 2 and 6, so we didn’t want it to be too…well, pink. The aim was more garden fairy, going for the fantasy/mythological angle over the rather illogical (when you think about it) fairy/princess hybrid which seems to saturate the toy and clothing market for young girls.

Besides, a mutual friend had organised a wonderful princess party for her daughter just a couple of months previously – so we weren’t about to try and compete.

On arriving, each girl was offered a fairy skirt (alright, so these did include the colour pink – nothing wrong with a smattering of girliness). We made these following this amazing YouTube tutorial.

Wondering what we could offer the boys (although they probably would have been happy in fairy skirts too), the amazingly talented Jen whipped up these beautiful crocheted Peter Pan-style hats. No, I wasn’t kidding when I dropped that into the third paragraph. They really did happen. And they were brilliant.

Up till now, my kids’ parties have always been held at home, where there are toys to keep everyone happy between the games and such like. So, as this party was held in our church hall, with no such luxury, we needed a variety of open-ended activities to entertain the troops while there was nothing structured going on.

We found these wings from Baker Ross, and set up a table for wing decorating, using bingo dabbers, glitter foam and sparkly gem stickers.

Then there was a wand-making table:

A fairy cake decorating table, with plenty of sparkles and sprinkles:

And a fairy-themed play dough table. Two glittery play doughs, one lavender-scented and one basil-scented. Sparkly beads, cup cake cases, conkers and a selection of rolling pins and plastic knives gave the kids a variety of options:

Here’s Missy, unable to resist having a smell of the basil play dough (or is she wiping her nose with it?!):

Putting the finishing touches to her creation:

We were fortunate to have a safe outdoor space with a few toys – and fine weather – as an extra form of entertainment.

Three-year-olds (in our experience) don’t have too much stamina when it comes to party games, so we kept these short and simple: Pass the Parcel (of course!):

And a fairy wand hunt:

It was fun making these little wands from small colourful craft sticks and star stickers, and finding all 50 of them kept the children going for ages:

We kept the food straightforward and simple. Previous parties’ experience has shown that a) kids never eat as much as you’re expecting them to at a party, and b) sandwiches just aren’t a popular option. (Why go for something you eat for lunch every other day of the year?) So we went easy on the sandwiches – but cut them out as flowers and hearts just because.

For dessert, there was fairy jelly – i.e. normal jelly, with sweets at the bottom, served in disposable Martini glasses (don’t they look fab?) and sprinkled liberally with edible glitter, stars and pearls.

My friend Laura had a chuckle at the many ensuing sentences you’d never expect to hear at a 3-year-old’s birthday party: “It’s impossible to get these sweets out of the stems of the Martini glasses”, “Oops, the base has come off your Martini glass”, and so on.

For no particular reason, I wish to point out here that the marvellous Tinkerbell plates came from Poundland. I love that place. Here’s Tinkerbell, with a bouffon a-la-sausage-roll:

And the cups were also Poundland – customised with cheapo flowers from Tesco. (Scroll to the top for the pic.)

And then the cake. Hooray, it stayed upright!

Jen pointed out that we didn’t want two entirely separate cakes, as that might force our guests to choose which one of us they liked most. And, seeing as we couldn’t think of an idea for a second fairy cake anyway, we just made a massive cake board and baked two toadstool cakes. I’d give you a tutorial, but it really was quite a shambles. Anyway, they survived, were iced (just), and actually ended up pretty decent, don’t you think?

Who wants a perfect cake anyway?

[Incidentally, I rather fancy the idea of Slummy Mummy YouTube tutorials…perhaps I could film myself making a mess of Missy’s hair, demonstrating a rubbish art activity, or ballsing up a fairy toadstool cake.]

You may have guessed that I didn’t stick to a £30 budget like I did last year. (Read about Missy’s £30 dollies’ tea party, and Mister’s £30 robot party if you’re interested in budget parties.)

It’s a good reminder that spending more doesn’t necessarily mean less work. However, you probably realise that I go mental over kids’ parties, so I actually (dare I say it?) enjoy the preparation. And sharing our girls’ birthday party meant that Jen and I could go that little bit more extravagant, and still keep it to a reasonable cost.

Disclaimer: this party was brought to you by the letters I (for Insomnia) and M (for Madness), and (of course) the number 3. My bedroom is thick with dust, the drive is overgrown with weeds, and various friends’ texts and messages were ignored during the making of this party. So we shall hear no comments along the Supermum lines, please – unless they’re directed at Jen, of course, who did this all whilst Very Pregnant and also Trying-To-Sort-Out-A-New-Phone (possibly the most time-consuming challenge known to man). Credit where credit’s due.

HOW DO I STAY ON TOP OF MY KIDS' TOYS?
ADOPTION: ACCEPTING UNCERTAINTY
WHAT DOES ADOPTION LOOK LIKE, 14 MONTHS IN?
5 FUN CLEAN-UP ACTIVITIES FOR KIDS
IS IT POSSIBLE TO BALANCE FINANCES, MENTAL HEALTH AND RAISING A FAMILY?
100 FREE OR CHEAP SUMMER ACTIVITIES FOR KIDS
A FAMILY ADVENT: TWO CHRISTIAN WRITERS SHARE THEIR FAMILY ADVENT TRADITIONS
DAVID AND GOLIATH - A SONG FOR PRESCHOOLERS
Tweet
Share
Share
Pin

Previous Post: « MEMOIRS OF A PRESCHOOL MAMA (OR LETTER TO A NEW MAMA)
Next Post: 5 WAYS TO HELP YOUR CHILD SUCCEED IN SCHOOL »